Iran is a danger and Obama as President is dangerous. Two peas in a pod.

By RICHARD A. OPPEL JR. 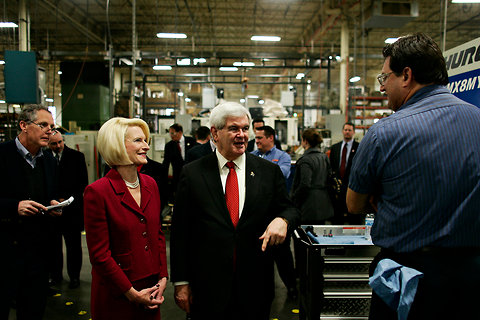 Michael McElroy for The New York TimesNewt Gingrich and his wife, Callista, with workers at the Jergens plant in Cleveland on Tuesday.

3:07 p.m. | Updated CLEVELAND — Newt Gingrich asserted on Wednesday that an Iranian nuclear attack on the United States was “a real danger” and that it could kill and wound hundreds of thousands of Americans.

His comments were the latest in a string of hawkish and even apocalyptic statements that some Republican presidential candidates, particularly Mr. Gingrich, have been using to discuss Iran.

But his remarks Wednesday at an appearance here may have been intended to carve out new space on the issue against Rick Santorum, who now appears much more of a threat to Mr. Gingrich after Mr. Santorum’s surprisingly wide victories in Colorado, Minnesota and Missouri on Tuesday night.