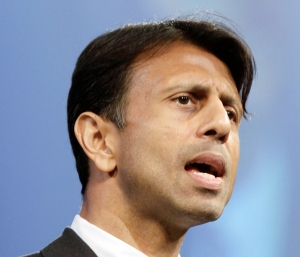 Governors from both parties are concerned about the Pentagon budget proposal that calls for the smallest U.S. Army since 1940. Sec. of Defense Chuck Hagel’s plan to “significantly reshape America’s land forces” includes reductions in the National Guard, which falls under the command of state governors.

Gov. Nikki Haley talked about the controversial proposed cuts at a press conference with three other Republican governors after meeting with the president on Monday.

According to Haley, Obama responded to their concerns about the National Guard cuts dismissively: “Many people in the room has asked for cuts. Now you’re getting them,” he reportedly said.

She blasted the president for punishing “all these people who want deficit reduction – by cutting the National Guard? It’s just not a logical way to do things.”

Haley said the President’s tone changed with all governors when talking about proposed Guard cuts. “It automatically went into an almost aggressive nature by him implying that, ‘Many of you wanted cuts that’s what you said you wanted. Don’t start coming in and now complaining that these cuts are affecting you because you said you wanted it and now you’re going to get it and you have to live with it. And if somebody questions it, I’m going to have to say something about it.’ “

“I want to speak as a military wife. (Her husband spent much of 2013 deployed in Afghanistan with the S.C. National Guard.) Look at what you’re telling all of these soldiers across the country that they left their businesses, they left their families to go serve their country. … You’re going to hollow out the National Guard? It is really a slap in the face to anyone who in the past decade has served multiple times and left their life to do this. … The active military hasn’t felt the pain the National Guard has felt. This is not how you show your thanks. Let’s be very clear there are a lot of places you can cut in Washington. The National Guard is not one of those that has to be on the priority list.”

Video via the Republican Governors Association:

In his delayed official budget request to Congress, Obama reportedly will  ”call for an end to the era of austerity.”

Calling the ramped up spendathon we’ve been on since he was elected, “austerity,” is “an abuse of the language” as Charles Krauthammer calls it.

But calling for an end to the era of austerity, while slashing the military, is an abomination.

So much for Obama’s “smart power.”