We have never regarded Islam as a religion. We have always regarded Islam as an evil cult of intimidation, subjugation, death and destruction. Nothing more. Wake up and you will realize there are few choices in dealing with Islam.

Those are your choices. 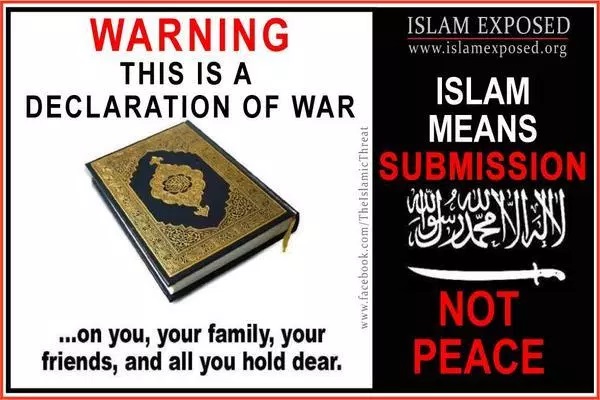 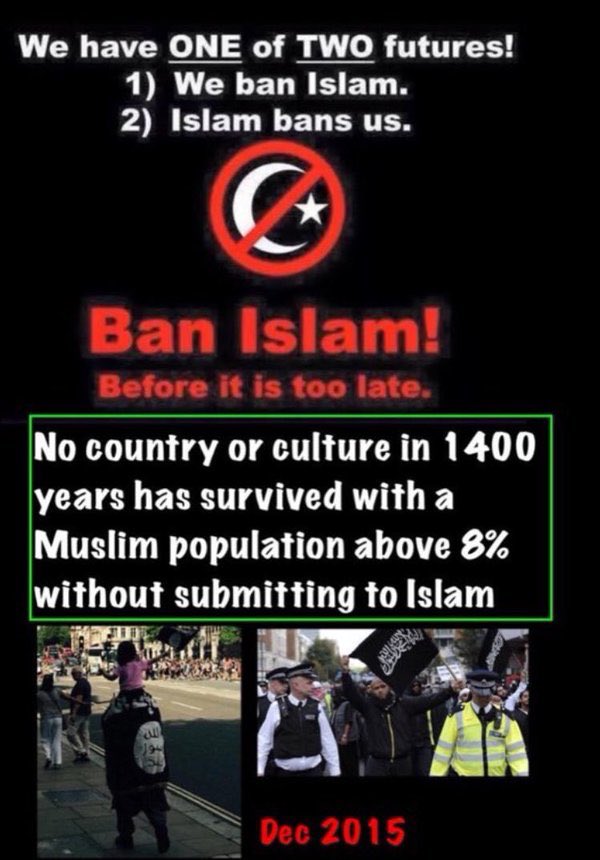 The status of Islam should be clarified if the debate on how to defeat terrorism is ever to bear fruit. Islam, I would argue, is not a religion in the common acceptation of the term as a community of believers dedicated to the loving worship of the Divine, the sanctity of life, and the institution of moral principles governing repentance for sins and crimes, making life on earth a stage toward a higher reincarnation, an ineffable peace, or a confirmatory prelude to eternity in the realm of a righteous and merciful God.

n fact, Islam is an unrepentant politico-expansionist movement clothed in the trappings of religion and bent on universal conquest by whatever means it can mobilize: deception (taqiyya), social and cultural infiltration, or bloody violence, as its millennial history and authoritative scriptures have proven. (See Koran 13:41, which is meant literally despite the attempt of apologists to launder its purport: “Do they not see that We are advancing in the land, diminishing it by its borders on all sides?”)

There are several ways in which Islam differs from all other major religions. For starters:

The standard rebuttal that all faiths have at one time or another shown themselves prone to violence and repression misses the essential point. All the major religions have reformed themselves, reducing or eliminating the all-too-human tendency to sanctimonious oppression—and none of these faiths, let us remember, endorsed oppression as a universal creedal or Divine imperative. Such is not the case with Islam, a communion that since its inception in the 7th century has seldom strayed from its sanguinary path of carnage and subdual. Its incendiary prescriptions and commands, as many scholars have noted, are open-ended and contain no “sunset clause.” They are perpetual and mandatory, feeding what essayist Bill Kassel calls “religious-themed barbarism.”

Others might argue that world-historical numbers are sufficient to constitute the legitimacy of a belief system. An umma comprising a billion-and-a-half adherents is no trifling matter. Numbers, however, do not in themselves determine what qualifies as an ethically reputable, socially harmonious or spiritually viable religion or political grouping. Nazism and Communism counted in the millions of devout believers, but no reasonable person would consider such covenants as morally justifiable. Not coincidentally, both of these totalitarian movements found a natural home in Islam: Communism in the pan-Arab nationalist movement (see Eric Davis, Memories of State, and the purpose of the Eisenhower Doctrine) and Nazism in a canonical Islam already richly manured with anti-Semitic beliefs and tropes. With respect to the latter, we recall the Grand Mufti of Jerusalem Haj Amin al-Husseini’s infamous collaboration with Hitler to further the aims of the Axis powers and facilitate the Nazi “final solution” of the “Jewish question.” Islam plainly shares the same septicemic tendencies and imperial ambitions as its two erstwhile political allies, as it does their popular appeal.

Islam is, consequently, not a “religion of peace,” as our weak-minded and complicit “leaders”—politicians, intellectuals, academics and journalists—tirelessly and tiresomely claim. “Islam is not terrorizing the West because it can,” writes Raymond Ibrahim, “but because it is being allowed to”—legally as well as sentimentally, we might add. In the name of avoiding so-called slanderous stereotypes and of promoting “diversity,” the powers-that-be refuse to recognize that Islam is, in effect, a triumphalist political theology of conquest and colonial subordination wherever and whenever it manifests itself, and has shown itself to be largely immune to doctrinal retrofitting. PJ MEDIA read more

1 Response to Is Islam a Religion?