As violent crime and deadly shootings soar in NYC, Commie DeBlasio assigns 27 cops per day to…

While ignoring the wave of deadly shootings, violent lawlessness, and vandalism by Black Lives Matter/Antifa thugs, Mayor Bill de Blasio is more concerned with protecting the giant yellow eyesore than he is about the safety of residents and visitors. So, he has assigned 3 shifts per day of 9 police officers per shift to protect the Black Lives Matter street vandalism in front of Trump Tower from New Yorkers who’ve been painting over the yellow letters. 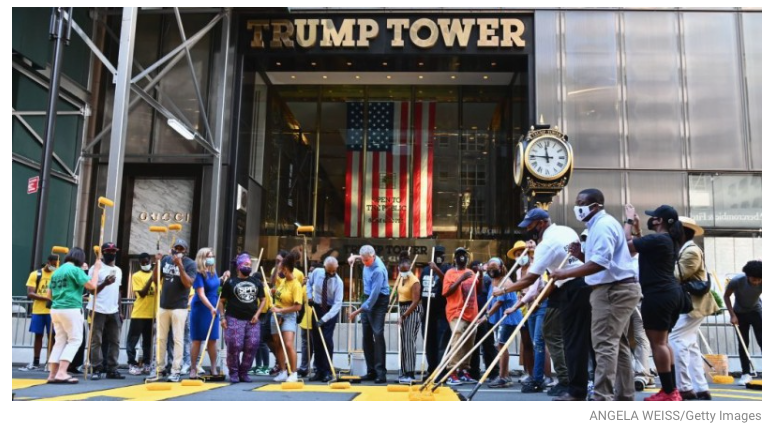 StateofPress  Bernard Kerik, who was police commissioner of New York under former Mayor Rudy Giuliani, said he heard Thursday that de Blasio has one sergeant and eight other officers assigned to guarding the Fifth Avenue mural during each of three daily shifts. “ Kerik tweeted: 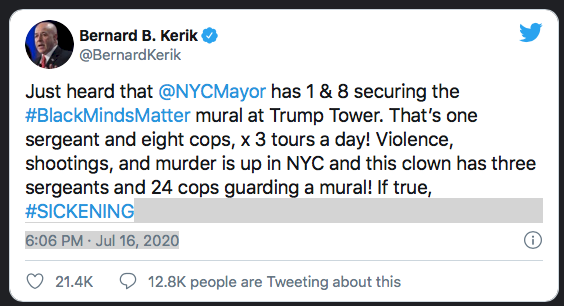 Black conservative Derrick Gibson, who is running for governor of New York, appeared to confirm Kerik’s report, tweeting that he “was just there and spoke to the cops,” who, he claimed, were “not happy” about “getting paid to baby sit paint.”

Kerik is a frequent commentator on policing issues and retains ties to New York law enforcement circles. De Blasio and his wife helped paint the mural on July 9, and after a vandal splashed red paint on the mural on Monday, the mayor responded by saying, “The Black Lives Matter movement is more than words, and it can’t be undone.” 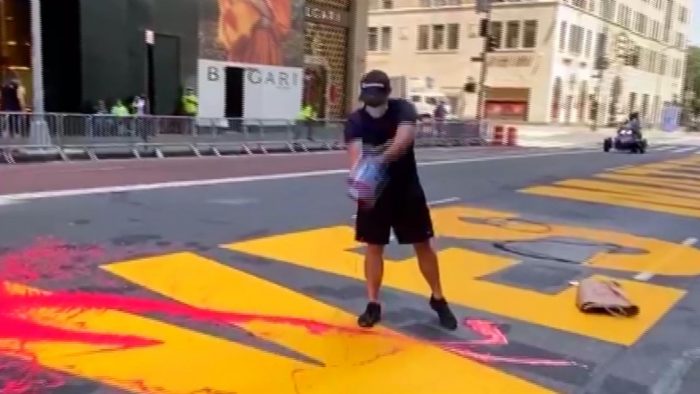 The notion that the city would devote heavy resources to defending the BLM mural after cutting next year’s police budget by $1 billion amid a crime wave struck a nerve with de Blasio’s critics.

Some pointed to the irony in having scores of police officers protect a mural in support of a movement that has backed calls to defund police.

New York has been plagued by a surge in shootings and other violence since anti-racism protests sprang up across the US following the killing of unarmed black man George Floyd in police custody on May 25. On Monday alone, 18 people were shot in 14 separate incidents. On Wednesday, department chief Terence Monahan and six other New York police officers were injured in clashes with protesters on the Brooklyn Bridge. BARE NAKED ISLAM read more