Long Arm of Hamas Extends to Dallas-Fort Worth Black Extremist Groups
As the four-year anniversary of the mass shooting of Dallas police officers passes, a lawsuit has been reopened which alleges that social media outlets allowed the Palestinian terrorist group Hamas… 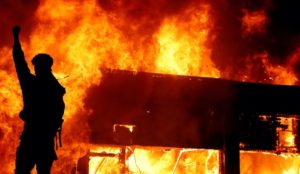 As the four-year anniversary of the mass shooting of Dallas police officers passes, a lawsuit has been reopened which alleges that social media outlets allowed the Palestinian terrorist group Hamas to radicalize Micah Johnson, leading the former U.S. Army reservist to take the lives of five police officers while injuring nine others.

Plaintiffs in Retana v. Twitter, Inc. allege that about two years before the attack, Johnson – a black nationalist – began sympathizing with Hamas. According to court documents, Johnson told a woman that he had just returned from Afghanistan and that “he was very much pro-Gaza,” leading her “to believe that he had been radicalized to the Palestinian cause supporting violence against Israel.”

Although three separate lawsuits have yet to present conclusive evidence of connections between Hamas and the Dallas shooting, black identity extremists from Dallas have expressed appreciation for the terrorist group’s violent revolutionary tactics, while Hamas’s local Islamist proxies have co-opted black civil rights causes to bring attention to their own radical agenda.

Plaintiffs in these cases discuss the long-standing connections between Hamas and national black separatist organizations. They point to Hamas sympathizers who furnished advice and support in 2014 to police protestors in Ferguson, Missouri, and they refer to “black separatist hate groups” which took a 10-day trip  in 2015 to the Palestinian Territories and Israel. Led by a guide from the Popular Front for the Liberation of Palestine, a U.S.-designated terrorist organization, activists from the black civil rights group Dream Defenders participated in a riot against Israeli soldiers and law enforcement.

In Dallas, black identity extremists continue to sympathize with Hamas while lauding its violent tactics.

Founded in 1989 in Dallas, the New Black Panther Party (NBPP) advocates an anti-white, anti-Semitic message of “black unity, collective action and cooperative economics.” Its leaders openly sympathize with the Palestinian resistance while demonizing the “crackers over in Israel” who oversee a “Synagogue of Satan.”

In 2014, NBPP Chief of Staff Chawn Kweli praised the insurgent tactics employed by Hamas and said that African Americans should “learn to fight for [their] land” from the Palestinians. “They don’t have all them tanks … but they got heart. They got will. They got guerilla tactics,” he said.

The Huey P. Newton Gun Club is a black nationalist militia that made headlines in 2014 for carrying out armed community patrols in predominantly African American neighborhoods of South Dallas. Johnson was reportedly affiliated with this racist hate group, and after his death HPNGC co-founder Yafeuh Balogun praised the cop killer and predicted that, “He will be celebrated one day.”

In 2018, Michael Thervil of Voda Consulting trained HPNGC members in marksmanship, community patrolling, and counter protests.  As with NBPP members, Thervil praised Hamas as a model for African American insurrectionists to emulate “in terms of combat,” professing his “deepest love for Hamas and those fearless fighters in Hezbollah.” Jihad Watch read more