Syrian Regime Emphasizes Its Protection of Christians By Building Miniature Hagia Sophia
The story is here: The Syrian regime under President Bashar Al-Assad has announced that it will build a miniature replica of the Hagia Sophia, in opposition to the Turkish government’s reversion of… 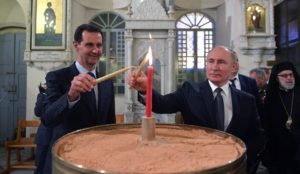 The story is here:

The Syrian regime under President Bashar Al-Assad has announced that it will build a miniature replica of the Hagia Sophia, in opposition to the Turkish government’s reversion of the building from a museum into a mosque.

“The construction of this mini Hagia Sophia, taking place in the central province of Hama, will be assisted by Syria’s prominent ally Russia and will reportedly show the importance of “peaceful dialogue” between the major faiths.

This construction is a way to emphasize the Syrian regime’s protection of its Christians, which has not always been understood in the Western world, hellbent as the media is in presenting Assad in the worst possible light. The Assad regime, under both father and son, has always shut down the Syrian government on Christmas, and also allows Christians to publicly observe Good Friday, neither of which is allowed in any other Muslim-majority country.

According to the Lebanon-based news outlet Al-Modon, the idea for the building was initiated by a man named Nabeul Al-Abdullah, the head of a pro-regime loyalist militia within the province. After gaining the approval of the metropolitan bishop of the Greek Orthodox church in Hama, Nicolos Baalbaki, the plans were then presented to the Russian military within Syria.

The replica is to be built specifically in the Greek Orthodox-majority city of Al-Suqaylabiyah, on a piece of land donated by the militia leader Al-Abdullah; a Russian team within Latakia’s Hmeimim military base is reportedly already working on plans for the construction.

Nabeul Al-Abdullah heads a militia loyal to the regime, a Muslim who wants to involve the Russians in his project as a way to secure his own future – possibly in Russia itself — should the Assad regime ultimately suffer defeat.

According to the Arabic-language newspaper Rai Al-Youm, Russian lawmaker Vitaly Milonov stated that Syria is the ideal location for the mini Hagia Sophia replica because “unlike Turkey, it is a country that clearly shows the possibility of peaceful and positive interfaith dialogue.”

While politically the Assad regime admits of no compromises, no “peaceful and positive” dialogue whatever with its enemies, as confirmed by its behavior during the last nine years of a ferocious civil war, in religious matters it does indeed stand, if not for a “positive interfaith dialogue”(there have been no signs of that) at least for the state’s protection of the large Christian population in Syria. Jihad Watch read more

In slap at Turkey, Syrian government to build replica of Hagia Sophia with help from Russia

In slap at Turkey, Syrian government to build replica of Hagia Sophia with help from Russia
This move further highlights the new formations of strategic alliances in the Middle East. It is sure to infuriate and humiliate Turkey, which has been bursting with pride over its new “conquest” of…